Two things can be said of the Toyota Hilux and Fortuner 3.0 D-4D engine: its durability and reliability is well proven after 10 years on the market and its once-impressive performance figures are now overshadowed by its competitors.

The 3.0 D-4D engine (or D4D in many people’s references to the engine) is one of the most popular engines in the SAC Performance Centres. Customers bring their Hilux or Fortuner 3.0 D-4D engines to SAC because they know that SAC has improved the performance on hundreds of these engines and because they know that SAC has continued with the testing and development of engine upgrades for the D4D. 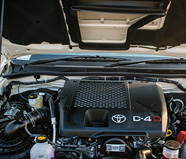 The newest addition and perhaps the peak of development of this engine, is the “Very Peri” upgrade that is on hand for the Hilux or Fortuner D4D. This upgrade builds on many years of dynamometer tuning and many different Unichip and Engine Control Unit (ECU) upgrades that have been done at Steves Auto Clinic.

Contact the SAC Branch near you about the “Veri Peri” Hilux & Fortuner D4D upgrade.

The “Very Peri” upgrade offers different stages of tuning and it utilises the newest technology available on the programmable Unichip system, which is plugged into the D4D engine through a Dastek Power plug and play system. With the new Unichip, SAC can report performance increases of up to 30% in engine kilowatt and no less than 60% more torque! For anyone looking to safely and reliably increase engine power on their Hilux or Fortuner, these are no small numbers.

What makes this performance upgrade even better, is the fact that it is done on a dynamometer, which considers a multitude of performance conditions. These include throttle, boost, fuel mixture, engine temperature, engine speed, engine load and even injector performance. At Steves Auto Clinic we will always insist that any performance upgrade or the fitment of a Plug and Play system is done by our Performance Engineers and on a dynamometer. Engines are expensive and we prefer that each unit is fitted, tested and optimised by a specialist and not merely plugged in by anyone, without considering the over 600 points of tuning available on the Unichip. 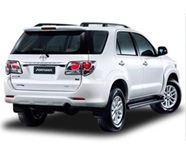 The “Very Peri” upgrade offers the driver a range of engine performance options that considers the different ways in which the Toyota Hilux or Toyota Fortuner D4D will be used. The options – referred to as engine maps – offer an anti-theft map, which immobilizes the engine, a standard map, which makes the bakkie or Fortuner drive exactly according to manufacturer specifications and an off-road and towing map, which gives the engine more power and torque at specific engine speeds, for when you are towing something or driving off-road. But if you chose the ultimate map, you will suddenly unleash a different animal under the bonnet of your Hilux or Fortuner. In its top setting, Steves Auto Clinic has unleashed the maximum amount of power that could safely and reliably be tapped from this sturdy engine. In this setting the power peaks and the Hilux or Fortuner also benefits from the Unichip’s popular throttle boost option, which makes the car perform even better. The “Veri Peri” conversion also allows for other tuning elements. This is best discussed with the Performance Specialist at your nearest Steves Auto Clinic, but it includes the fitment of a performance exhaust system, which significantly reduces back pressure and hugely improves gas flow from the cylinders through the exhaust.

Do your homework well: Unichip vs. other performance chips on the market. 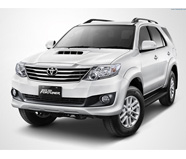 Steves Auto Clinic also offers a double-volume Power Cooler from the specialists at Dastek Power. This Power Cooler is front mounted and it is designed and tested to allow for a far greater volume of air flow to the engine, thanks to its superior cooling capabilities. With the fitment of the front mounted cooler, the bonnet scoop on the Hilux and Fortuner is better utilised to cool the entire engine and not only the intake air.

“It is very important to us that owners do not confuse our conversion to any off the shelf chip conversion where a cheap factory built chip merely increases fuel mixture without considering the hundreds of other parameters. We develop and test our conversions to breaking point and insist that the conversion is done by a specialist on a dynamometer. That is why we can back it up with a comprehensive warranty,” says Stephen Fischer, founder of SAC and a well known engine performance upgrade specialist.

The SAC “Very Peri” Conversion for your Hilux or Fortuner D4D is the pinnacle of performance improvements for South Africa’s favourite turbo diesel engine and it is built on over 30 years of expertise from SAC. Visit your nearest SAC Performance and Service Centre to learn more and to experience the mind blowing difference in performance and driveability from your D4D engine that is only available from Steves Auto Clinic.

The primary function of an upgraded intercooler is to improve on the cooling efficiency over the standard cooler.  This means that the entry air temperature needs to be dropped as far as possible (more than the standard cooler) at the exit of the cooler without compromising or interfering with the flow and or charge pressure- the boost. Our upgraded intercooler has been through very strict Research and Development procedures and has been properly tested to meet the requirements of today’s technologically advanced and challenged Diesel Turbo vehicles.  The new cooler mounts in the same location as the standard one and in most cases, utilizes the original pipes and clamps. (With the exception of the D4D Hilux that goes from top mount to front mount) The intercooler upgrade is an integral part of the performance enhancement process that optimizes the volumetric efficiency of a TDi Bakkie. In short, the way that the cooler works is to cool down the air as much as possible – that is being produced by the turbo charger (that heats up when compressed).  Fast-hard riding as well as towing causes thermal engine temperature creep which eventually spirals out of control and deteriorates your vehicles engine condition and shortens its life.  It’s not only about more power, sometimes we need to consider what the engine is being exposed to and have some mechanical mercy. Our upgraded intercooler is an absolute “must have” product for those performance fanatics out there, or the people that want maximum power at safe levels. Speak to our sales and service advisors for more information and pricing. Contact us today for your free quotation.

Gone are the days that you take your half a million-rand Bakkie to a corner exhaust shop for a cheap free flow exhaust. It’s fair to say that the bolt-on free flow exhausts of today at SAC have been revolutionized and are becoming more and more popular amongst the enthusiasts. It is no longer just a poorly welded and routed exhaust that rattles and knocks over every bump, it is a properly engineered, big bore, mandrill bent stainless steel-low restriction exhaust system.  It is manufactured in such a way to be a bolt-on fitment in a workshop with very little effort to ensure perfection. Seeing the exhaust system in its raw form, packed and laying on a shelf – it is clear to see that this is an export quality product that will be installed on your vehicle, and it will compliment without any doubt – the performance enhancement plug and play kit and or upgraded intercooler system in many ways – most of all the sound and power will be much improved.  The bolt-on exhaust system is routed along the exact same rout under your vehicle and hangs with similar brackets on the standard rubbers.  The heat protection that has been provided by the manufacturer under your vehicle to protect the undercarriage is still effective and useful with the fitment of these bolt-on exhaust systems. So, if you want the ultimate Bakkie performance enhancement package speak to our sales and service advisors about a bolt-on exhaust system. Contact us today for your free quotation.

Find the workshop in your area.