You can tell a Land Cruiser 70 Series owner from a mile away. While other off road enthusiasts talk about ground clearance and capabilities, they just quietly smile and nod; because they know the Cruiser has proven itself in any conceivable situation to earn the title “Master of Africa”.

Despite the Cruiser’s capabilities, the diesel engine in this bakkie or station wagon has always left much to be desired. The 4.2 in-line six cylinder (code-named 1HZ) is virtually unbreakable and it is comfortable with even the dirtiest diesel, but with 94 kW and 345 Nm the engine is pretty pedestrian.

Do your homework well: Unichip vs. other performance chips on the market. 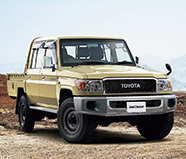 Then the single-turbo V8 arrived. As a cousin to the twin-turbo in the Land Cruiser 200, this V8 held much promise of more power, faster acceleration and less hard work when driving off road.

And the 70 Series V8 has delivered on that promise, which is evidenced in the large number of V8 Cruisers that are sold every month.

But it was not long after the new V8 landed on local soil that customers arrived on our doorstep to discuss power upgrades. Many of these customers had read and heard what Unichip offered customers of the same vehicle in other countries, such as Australia. They wanted to know when Steves Auto Clinic and its engineers would also make it available for the local market.

Well, the wait is over. We now offer a multi-stage conversion for the 70 Series V8 that delivers over 20% more kilowatt and a thumping 30% in expected extra torque. In a V8 that already puts the old 4.2D in the shade, this upgrade is impressive indeed. As an added benefit, the upgrade has made the 70 Series V8 a dream to drive, which has led to the name “THE EQUALIZER” for the group of V8 70 Series upgrades offered by Steves Auto Clinic. Contact the SAC Outlet near you about this upgrade.

As with any turbo diesel upgrade, the team at Steves Auto Clinic tests the conversion in full before fitting it to even one customer’s vehicle. SAC also programmes and tests every conversion in three dimensions on its four-wheel dynamometers. These parameters includes engine speed, load, ignition, fuel mixture and boost. This not only ensures that every engine delivers its best performance despite its age and usage patterns, but also that every conversion is safe and durable, just like the Land Cruiser 70.

To explain the conversion stages available on a Land Cruiser 70 would be best left to your local Steves Auto Clinic specialist, but every conversion includes the fitment of a Unichip Plug and Play unit, that is pre-programmed with different engine maps.

The engine maps in the fitted Unichip include a special Anti-Theft setting that immobilizes the engine. Next up is a standard setting which is exactly that; the engine in standard factory form. The next map is developed to allow for the best possible fuel consumption when driven normally or in city traffic.

The fourth map was created to make the Land Cruiser 70 Series even better at what it does best, off road driving and towing heavy equipment. This map makes the engine very powerful, yet driveable for the times you tow a boat or caravan or when you are looking for low down torque whilst fording rivers or crawling over rocks.

The last map is the gift under the Christmas tree. This map considers aspects such as throttle response, boost control, fuel pressure, engine temperature, mechanical load and many other elements to give the driver the most possible power from this beautiful engine without placing undue stress on the mechanicals, such as the clutch or drive shaft. It is in Map 5 that you will understand why this conversion is called “THE EQUALIZER”.

“The full conversion can include the fitment of a special performance exhaust system that allows the V8 engine to breathe easier. Limiting exhaust back pressure but not increasing engine noise.

The SAC Performance Conversion for the Land Cruiser 70 Series V8 has gone through a long development process and now offers the best available benefit to customers, from maximum performance in one setting to the best possible fuel consumption in another and a flood of low-down torque in yet another for off road driving.

Visit the nearest Steves Auto Clinic to learn more about the conversions available for your Land Cruiser 70 and feel the difference when you have access to more power that considers the 70 Series’ mechanical tolerances and the need to remain durable and reliable.

Talk to Steves Auto Clinic about your 70 Series Conversion.